One could understand the 1970s in New York as a decade of disillusion, cynicism, bitterness, and anger. For many New Yorkers, the period, as for most of the Greeks after 2008, this extent of time was marked by convoluted hardships, restraining barriers, frustration, and an overwhelming feeling that the country had lost its direction, challenging the very heart of the post-war liberal consensus.

Such dimming environment spawned the short-lived phenomenon of Studio 54, as the mecca of the bright-lights-big-city epicenter of a heavily problematic society in conscious denial. The club owners, Steve Rubell and Ian Schrager, capitalizing on new formations and structures, scrawled the most “tantalizing” history of a reformed middle class conscience.

The exhibition, based on the social analysis of Felix Salt’s titular novel, by the American sociologist, Ralph H. Lutts, examines the sociopolitical parameters of crisis’s canonistical prototypes, as created by a middle class in escapism and its exploiters.

You had a good time, didn’t you?”: When the edge becomes the center

When one ponders the ‘70s in New York City, the word “pretty” doesn’t jeté to mind. The crumbling mayhem of the era portrays, and even preserves, the collective memory of a metropolis on the verge of a nervous breakdown, an aftermath of the Vietnam war and a Post-Watergate cynicism, “which caked the consciousness of the political and popular culture, providing a thick, gritty texture”1.

The malevolent effects of a city with a major “syndrome”, which actually could be described as “disease”, of fiscal and social implications, lurking not just under the city’s belly, but flaring up at any given moment, lay on the growth-stifling taxes and their cringe-inducing bonding practices, practically inseparable. The enormous loss of workforce was yet symptomatic of another perilous condition – the utterly unsustainable rate of social services. Facts aside, it is analogously clear that Athens after 2008, bombed by its own political hubris, has been crawling along the same curb of distributional politics and generalized theories.

Moreover, the particular global economic decline was that of the‘70s oil crisis, identically applicable nowadays – though through differentiated pathways, marking both decagons of time with an overwhelming feeling that the two countries had lost their direction, as if the future is in question with unresolved conflict and problems, which challenge the very heart of the post-war liberal consensus. Americans and Greeks alike, were faced with economic stagnation and recession, increasing poverty, decline in their standards of living, fears that impetus was becoming harder to channel, and bitter divisions over the country’s fundamental cultural values.

Such dimming social environment spawned the Studio 54 phenomenon, founded by Steve Rubell and Ian Schrager in 1977, and closed down in 1979, as the mecca of the bright-lights-big-city epicenter of a heavily problematic society in denial. Capitulating on new social formations and trends, as, amongst others, the equality for women, the increased recognition of homosexual lifestyle, the highly increasing numbers of the female workforce, the increasing use of sex in advertising, the rising crime rates, the decline of the mainstream religious experience and the system supporting middle-class, the rise in drug use and the growth of fundamentalism, the club rose as a titillating history-to-make of a reshaped social conscience in oblivion, away from predicaments related to survival and existence. Indicative of such bleak environment was New Yorker’s cover by Saul Steinberg portraying the view of the world from Ninth Avenue-“the heartland beyond the New Jersey border being one big, tidy, undifferentiated wheat square”2, published in the ‘70s, when New York felt most atilt with the rest of the nation.

As Wolcott explained, in the ‘70s there was much sharper divide between us (New Yorkers) and everybody else. It is this very dichotomy which defined the short-lived phenomenon of Studio 54 as the time when what spilled over from a deafening sweatbox or one Dionysian dance floor could repercuss through the entire culture, and create a magnetic pole of “beautiful people”, who would build up a critical mass. What, of course, survives is lore, which enlarges reputation and lays the groundwork for myth. So much ink and celluloid have been lavished on the nightlife of 54’s celebrity boogie-down, the periodically plummeting coke spoon, the auxiliary coterie of the post-Warhol-superstar-era, as a deceiving nostalgia of a lost status that oozes into a reformed conscience of obscurity. Not so different with what has happened in Athens, especially during the current decade, although on a less grand scale.

Here, enter Bambi - the humanized, fictional character by Felix Salten and Walt Disney’s biopic cynosure. Despite the character similarities in both versions, they differ in their treatment of the theme. As the American sociologist, Ralph H. Lutts, explains, “they (the versions) appear to represent biocentric views…The test of their biocentrism, however, lies in the faithfulness of their fictional animals to the reality of their biological counterparts”3. Salten’s Bambi presents a poetic vision of woodland life, while Disney’s is a extraordinary work of cinematic art, which did not set out to present the original creator’s philosophical view of the environment. Instead, “Salten’s complexities were whittled away in the pragmatic process of shaping the story for a visual medium and a mass market…In Salten’s book, Man is both a force to be feared and a puzzle…Bambi and the other creatures try to understand the nature of Man…The problem of Man is one of the book’s central themes, a problem that Bambi must solve in his effort to learn the lessons of survival in a fictitious Eden”4. But then, didn’t Disney create a wall between his rendition and the popular psyche as to not trusting or believing people could face their own problems? I think that the answer derives directly from the definition of the word Bambi took in American slang from the mid ‘70s on: he who is paralyzed and ineffectual, usually with fear or anxiety, at times of crisis and danger. And this is where the title of this exhibition lays upon, while becomes its central theme.

Bambies just for one night; escapism, perhaps, forever. Middleclass kids, celebrity wannabes, like Narcissus into his pool, anesthetized by TV glaring, favored the walking void past Studio’s entrance door into an affectless hero culture. Reveling in the glitzy, often coke-fueled glow of the famous regulars, could prance and preen in the flash of strobes and the din of disco into the wee hours. And the celebrities become cool spectators-reporters at an arena of hot events. Andy Warhol turns into a voyeur-in-chief to the rich-and-famous and then the marginal. Truman Capote recreated himself with reformed- than those from the ‘60s- bitchy aperçus, elevating himself as the city’s provocateur exotique. Interview came to be the bible of the middleclass new adage “I am flashed, therefore I am”. The Lizas, the Biancas, the Debbies, the Dianas, the Halstons, the Calvins grew into obsessions, sprinkled with poppers and cocaine, of an aging, misfortunate New York social class, tending to a gratuitous distraction.

Warhol became “the emblem”, as Robert Hughes points out, “and, to no small extent, the instrument of this change. Inspired by the example of Truman Capote, he went after publicity with the voracious single-mindedness of a feeding bluefish. And he got it in abundance, because the Seventies in New York reshuffled and stacked the social deck”5

With the opening of Studio 54 in 1977, Warhol’s magazine found its “new” Factory. It became a marionette theater in print: the same figures, month after month, fed the insatiable appetite of the middleclass symbiotic prototypes, created as mere objects of veneration that cavorted in the club’s proscenium, did a few twirls, sucked or snorted something, and tittupped off again. On the other hand, the time also called for the non-normative expressions of sexuality, as produced in the wake of the sexual liberation after ’68, questioning the political stakes and potentials of “the transgressive”, in terms of its expressions. With the 1972 release of the John Waters film Pink Flamingos, concerning the exertions of a brazen and voluptuous drag queen, by the name of Divine, the tradition of the 1960s pop artists, including Warhol and Claes Oldenburg, was on-continued, elevating the low brow and embracing mass culture. The film’s conventions and playfully deploying or defying genres, as exploited by Warhol, heightened Divine to the status of the “revolutionary safety valve” of Studio 54, able to claim some degree of “radical” political power for the nominal avant-garde. But such theater of the visual crackle captured all the incredible range of psychological insights among the club’s sitters. Jean-Michel Basquiat, though not such a regular at the Studio, could not avoid Warhol’s Pygmalion-ism, which formed a bromance of a suggestive artistic combat, at least in part staged for the benefit of the cameras and mutual mythmaking.

“You had a good time, didn’t you” asked Truman Capote the Broadway diva-in-decline, Tallulah Bankhead, after his famous ‘Black and White Ball’. “Yes”, she admitted. “I did.” “Well, then, what are you complaining about?”, replied he. 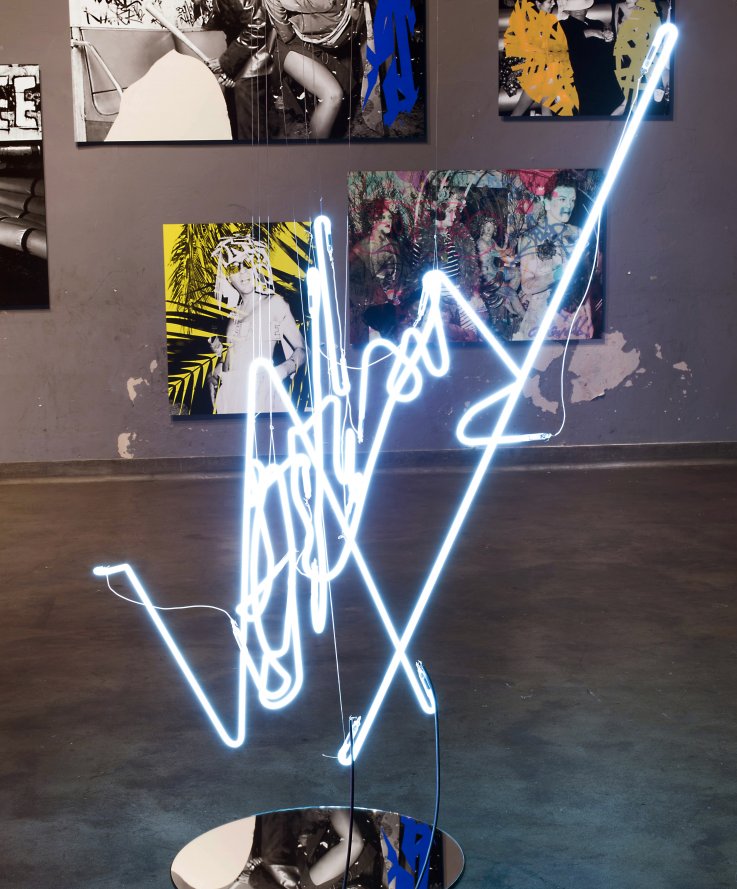 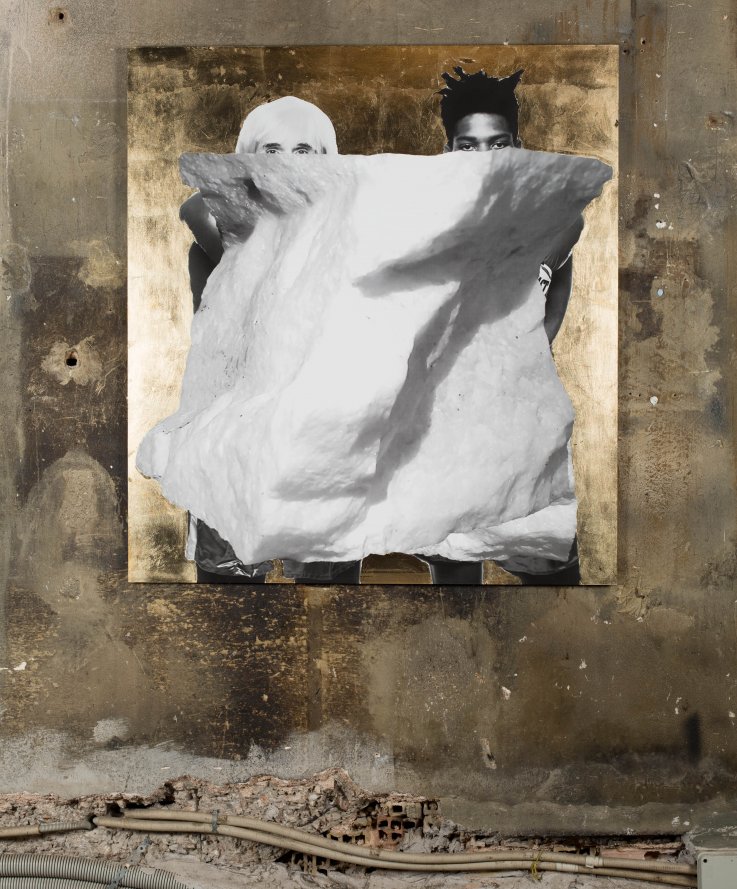 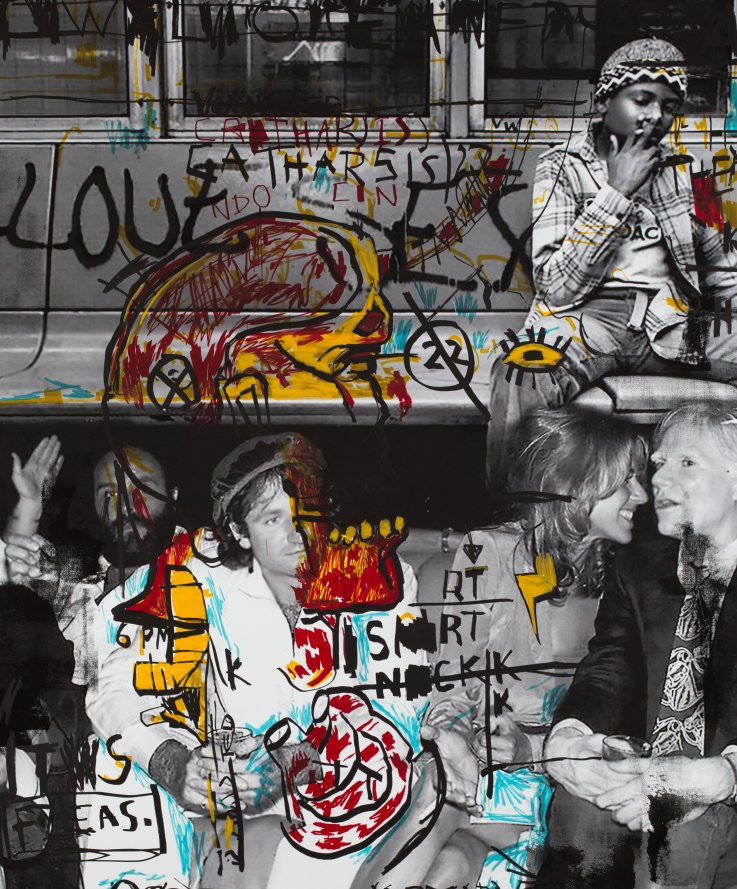 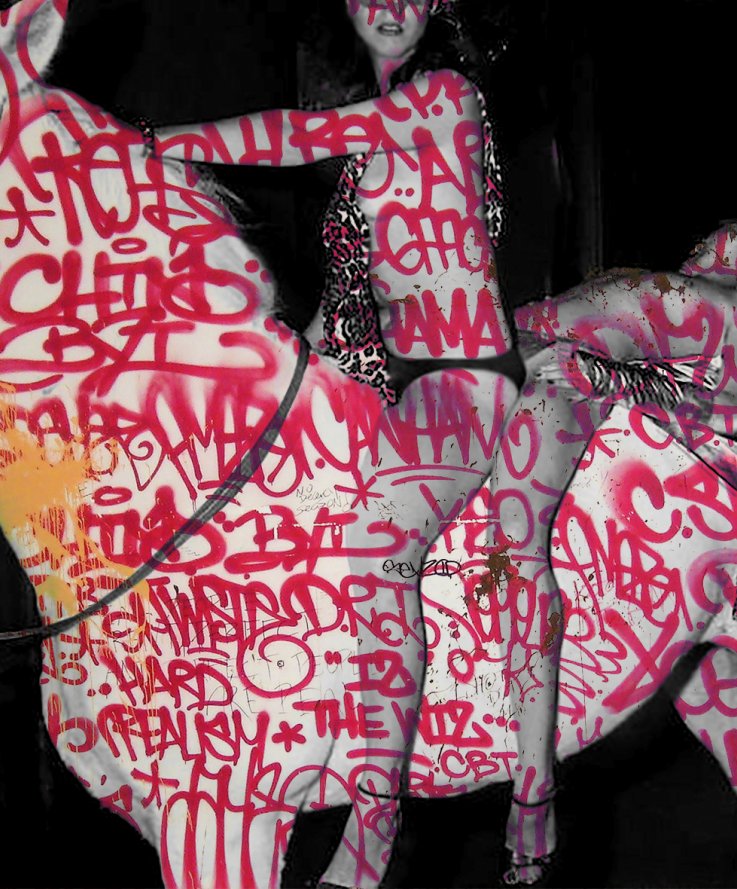 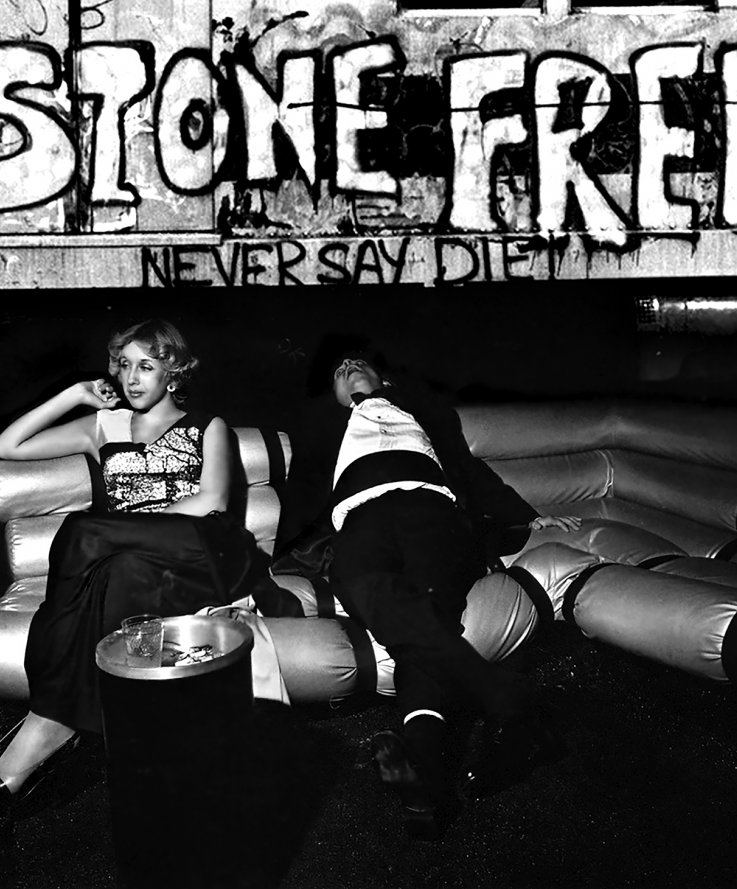 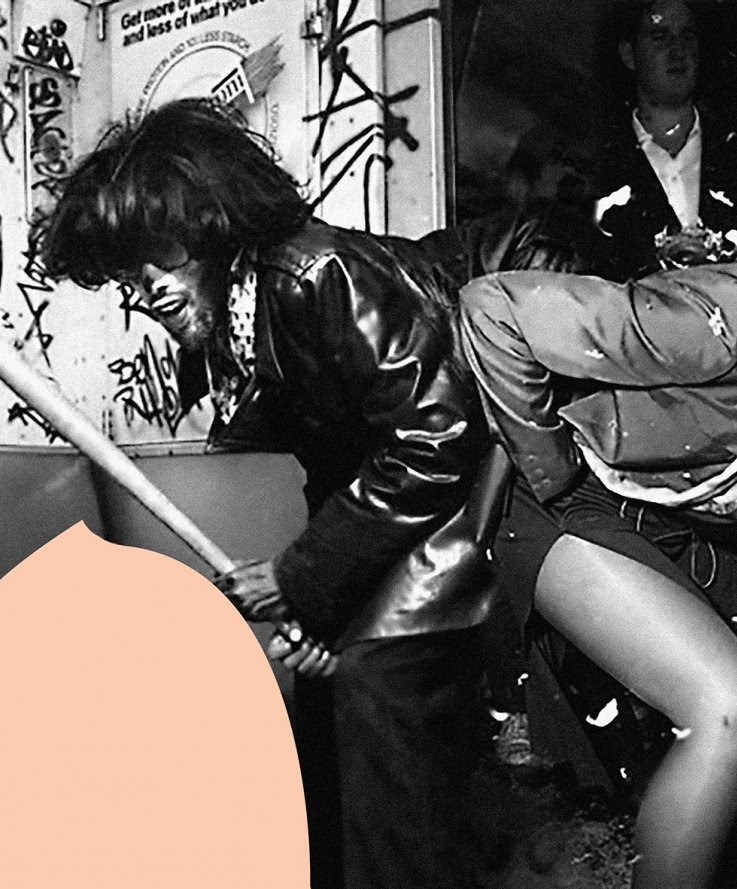 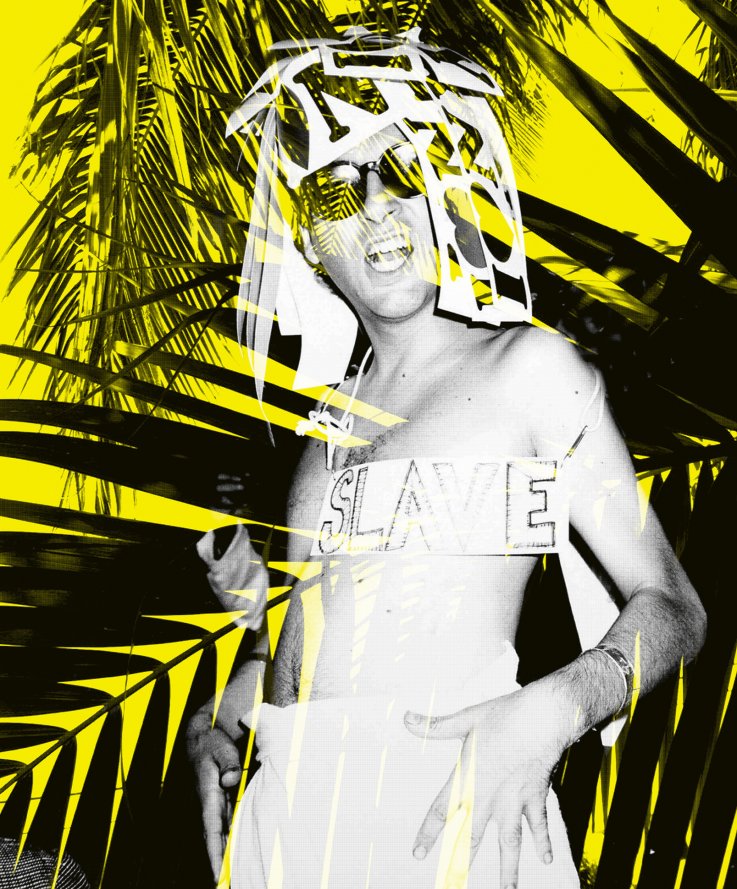 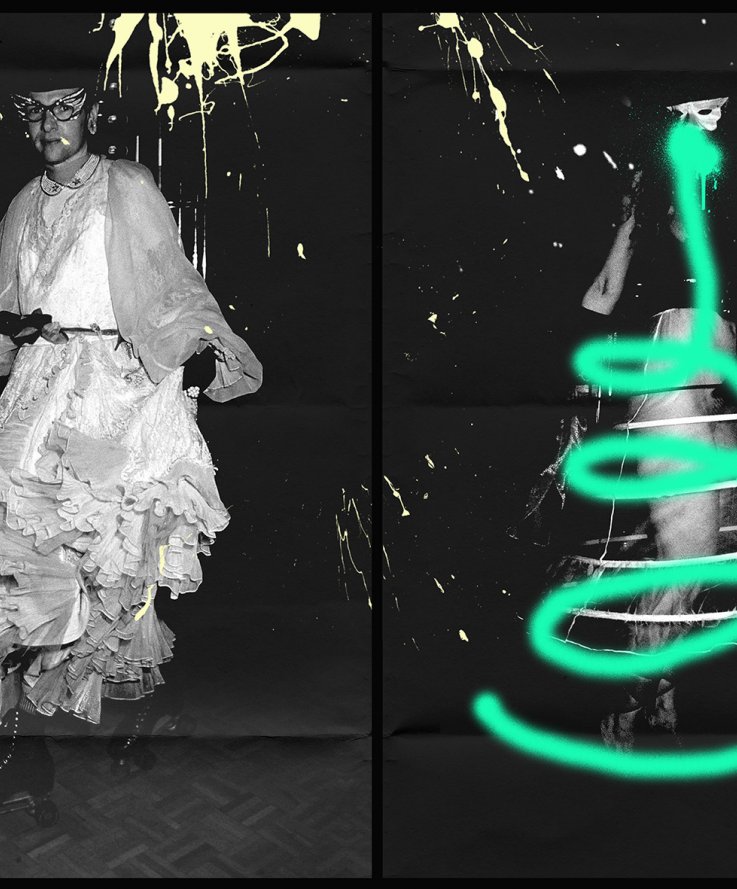 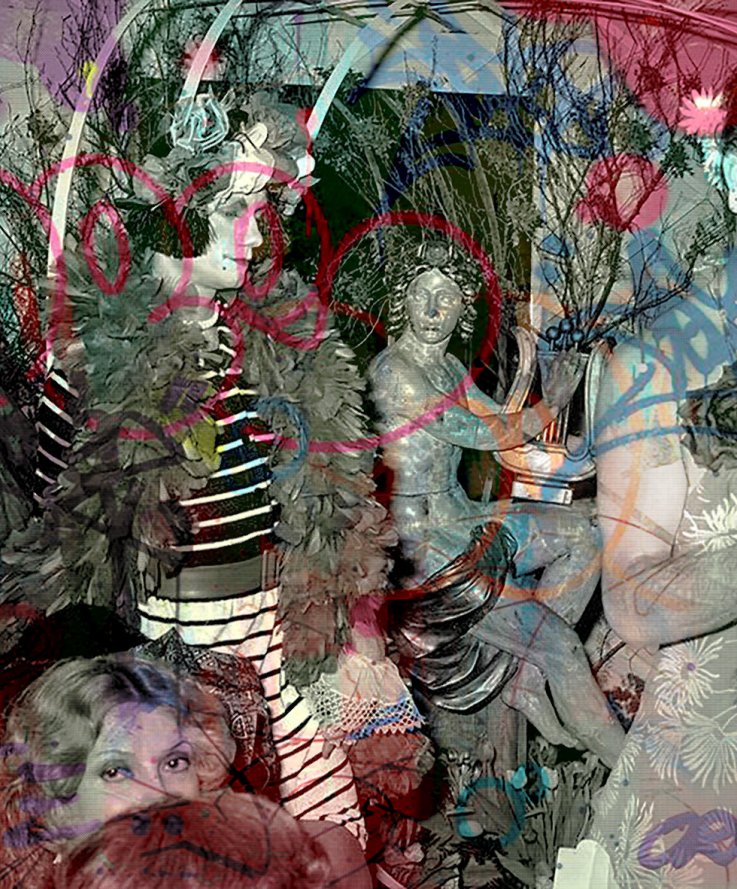 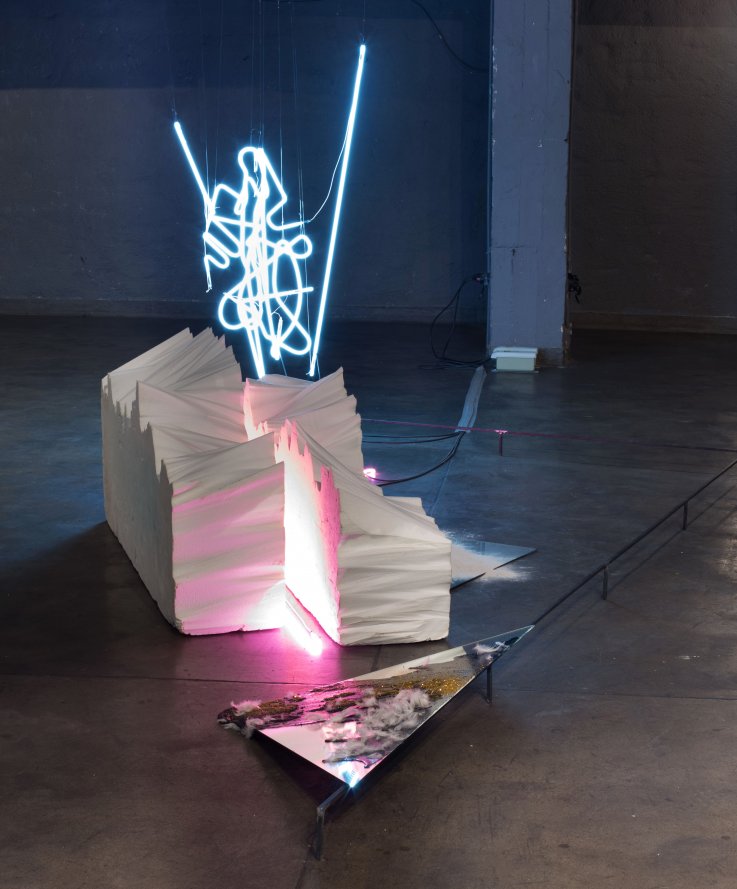 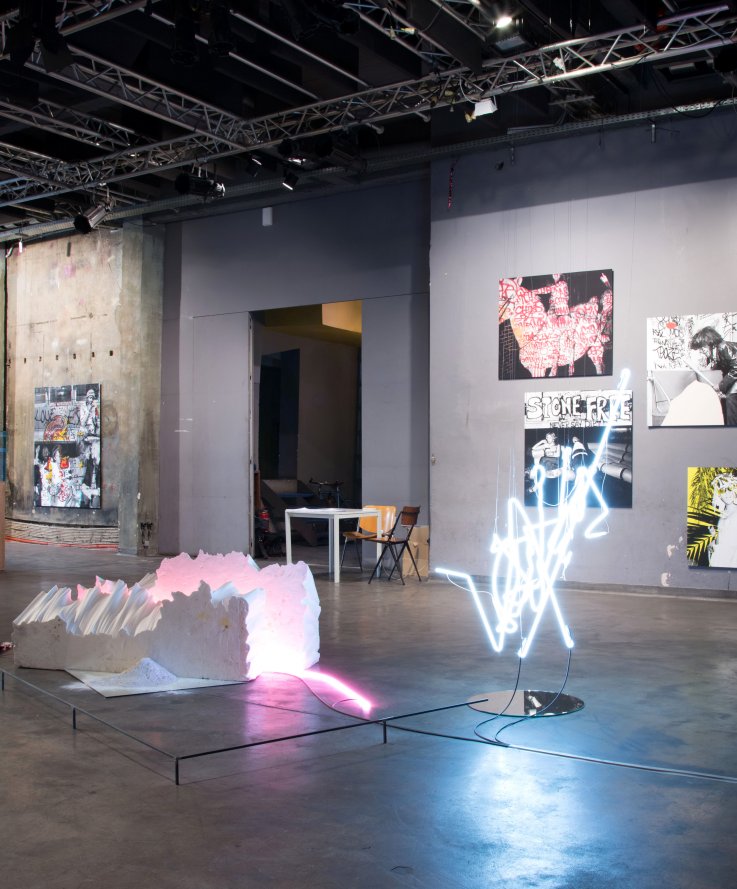 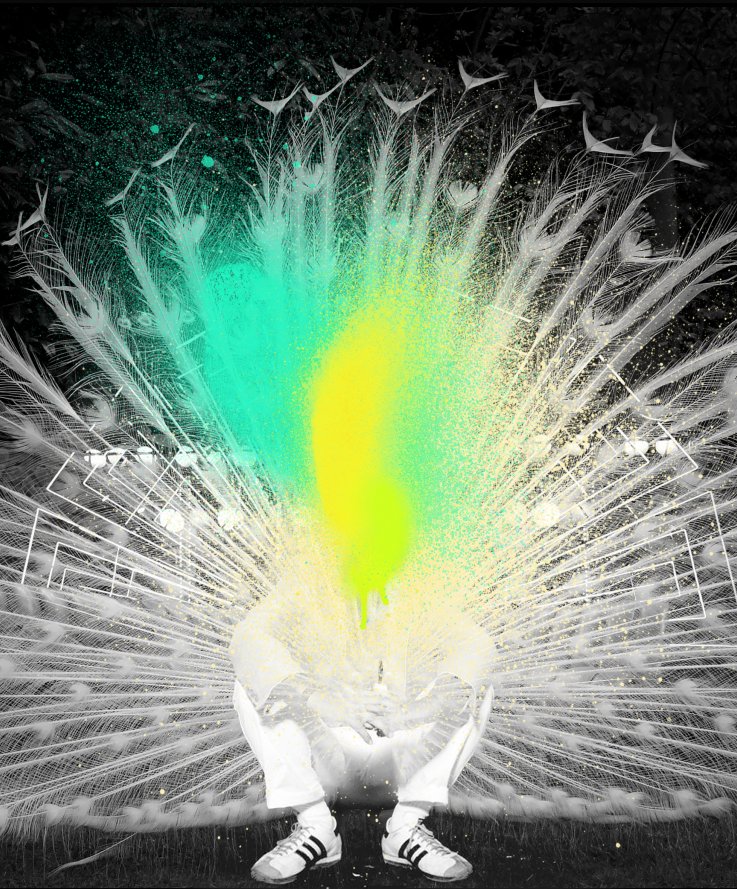 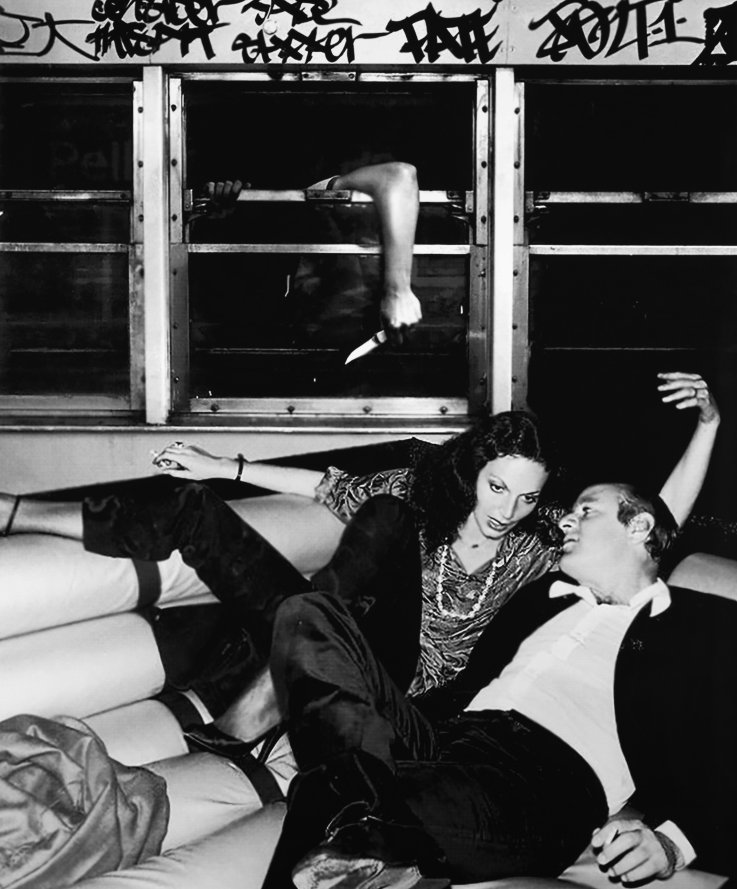 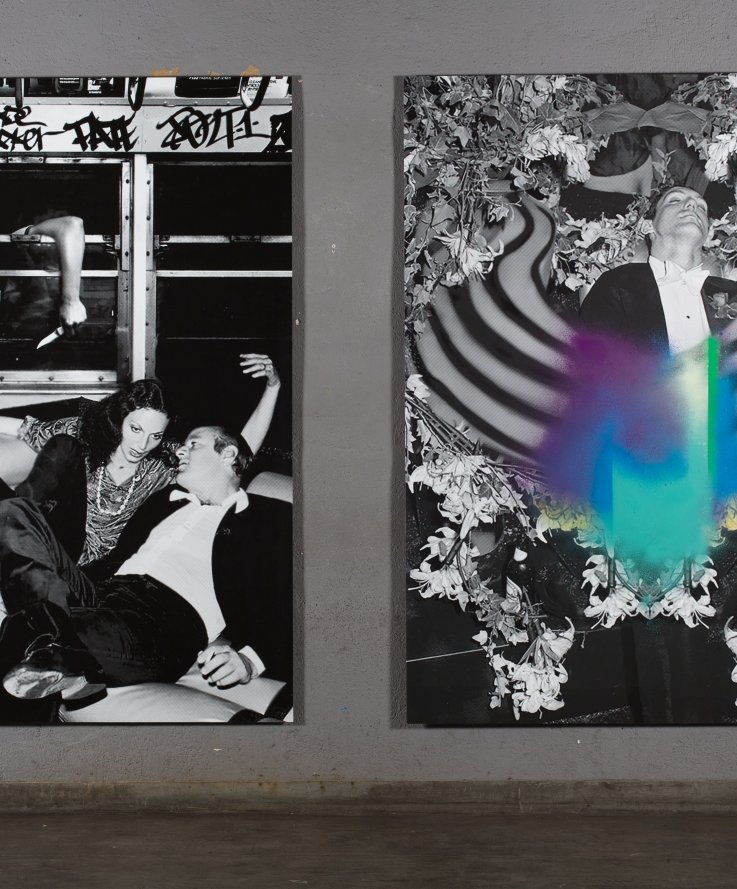 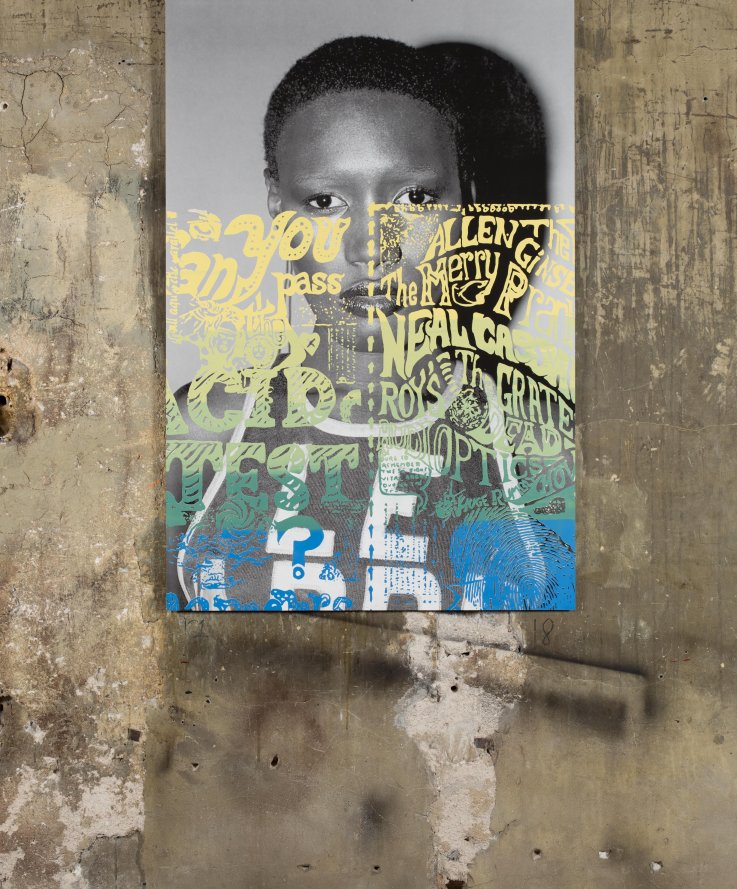 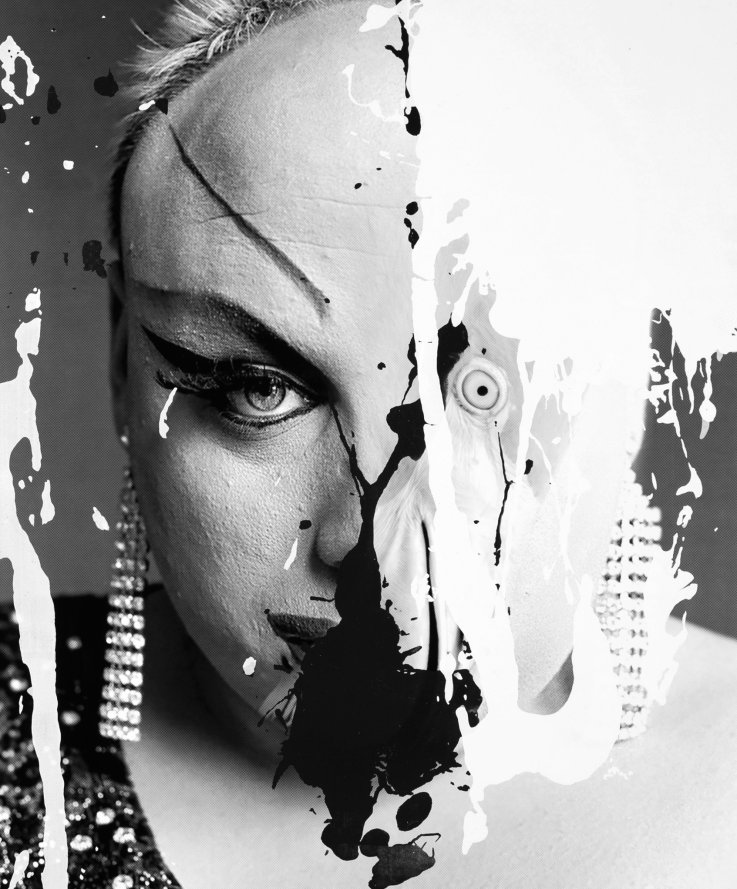 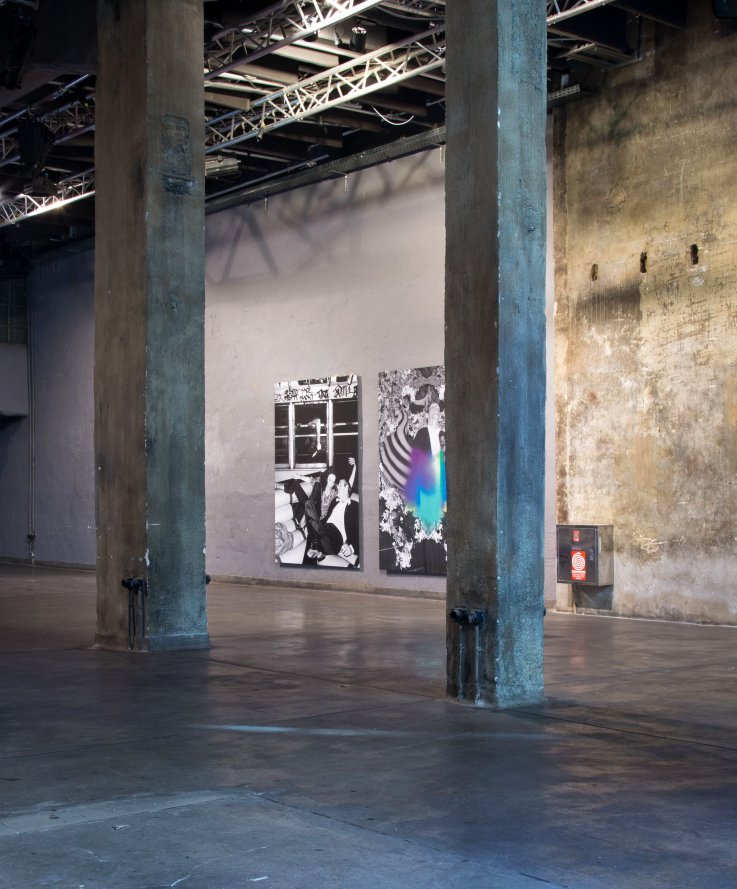